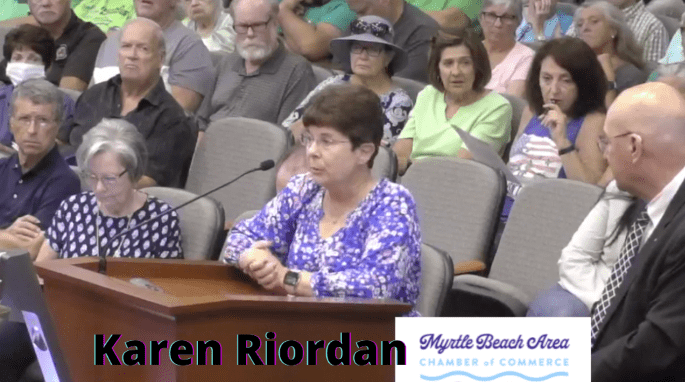 The Myrtle Beach Area Chamber of Commerce receives $51 million annually in tax gifts from a combination of taxes. A TDF tax, matching state monies, along with, a Horry County Accommodation tax donation all comprise to make up this $51 million in annual free tax grants.

NOT THE WHOLE TRUTH

While that statement was true, it was only half of the complete story. The MBACC sells the $51 million it receives to area hotels for top billing on its VisitMyrtleBeach.com website at $22,000 per property. $2,000 of these $22,000 funds – hotel purchased tax grants – must then be assigned to the Grand Strand Business Alliance (GSBA).

In short, MBACC is selling its tax gift to private hotel owners and requiring $2,000 per property then be turned over to the GSBA or one of the four PACs associated with the GSBA.

This converts a good portion of the $51 million tax gift into private chamber dollars with no strings attached on how MBACC spends that money. The public funds must be spent on “out of market” advertising. The converted private dollars can be spent any way MBACC chooses.

Councilman Al Allen asked about the nature of the dollars going through the Chamber.

“Even though it’s private funding, all of that funding still runs through the Myrtle Beach Chamber, is that correct?” asked Allen.

Riordan responded, “Yes, but we have separate bank accounts and as indicated not only do we do quarterly reporting to the county, to the cities, but we also are responsible for doing accounting back to the state of South Carolina.”

ALSO – NOT THE COMPLETE PICTURE

The South Carolina Supreme Court ruled against our news agency and others, stating we have no right to look at MBACC web statistics and bank records to investigate how the dollars are being spent and whether the spend is effectively working.

The City of Aynor, which Allen represents, had an annual net budget position of $ 987,723. Yet the town of Aynor is subject to all the rules of FOIA in the state of S.C. MBACC is not subject to any FOIA laws. At $51 million in tax monies annually, its budget is bigger than 40% of all S.C. cities. All of those small towns are required to respond to FOIA requests.

During the 2020 Covid year, MBACC spent the same $51 million, yet business was down 42%. In 2021, after the Covid year ended, hotels had a record year, but no significant increased dollars were spent by MBACC.

The correlation between dollars spent and tourists realized seems to exist on events that transcend the chamber’s tax expenditures. Former MBACC C.E.O., Brad Dean stated publicly that only 33% of City of Myrtle Beach tourists returned the following year after their initial visit.

Councilman Allen mentioned a mailer that was sent out in the county, which he said seemed like “an attack on councilmembers” who didn’t vote for the Interstate 73 proposal.

“After our vote on I-73, there was a mailer sent out, which was very political and seemingly targeted members of this council, that at the time did not support that vote for I-73, for whatever reason,” said Allen.

Riordan said, “Our mailer did not attack anyone, our mailer was sent out to the community to have them thank those members of council who did vote for I-73.”

NOT THE ENTIRE STORY

Members of MBACC, including Benjy Hardee, along with the Brittain Resorts Hotel family, Myrtle Beach Mayor Brenda Bethune, and a host of others pooled their monies in a successful, highly coordinated effort to get Jenna Dukes elected in North Myrtle Beach. Her opponent Harold Worley voted against the I-73 county funding, stating he wanted to see the Federal and State governments contribute financial dollars first.

After his statement, MBACC C.E.O. Karen Riordan warned Worley and others, that “more” votes would be coming on I-73.