Myrtle Beach- From Protest To Transformation

Despite the mayor and city council’s most recent promise of an ‘unparalleled quality of life’ for community residents this week, something is clearly not working. Perhaps this info graphic best explains what happened to the city millions have made one of America’s most popular beach destinations.

The key political influencer at the top of the graph above is the Tourism Industry,  largely made up of one local hotel family (property management company). 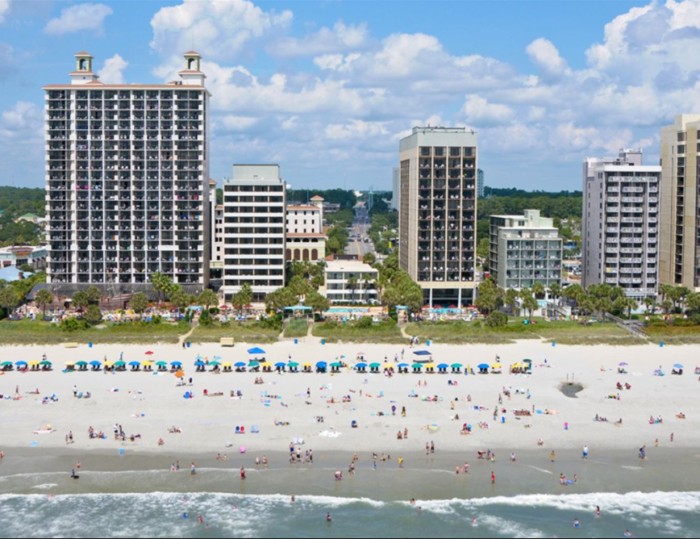 Myrtle Beach culture, however, has enforced an idea that it is imperative we residents work to hold up the tourist industry as in full control of all ideas Myrtle Beach and support this broken system as it currently exists.  Low city investment growth, stagnant wages, poor opportunities for job growth, a declining local downtown, high city debt, oceanfront bacteria spikes, unnecessary fights with county residents over parking, and a system that lifts up the interests of the few above the quality of life for our city and county-wide residents suggest otherwise.

The political operative of the tourist industry is the Myrtle Beach Area Chamber of Commerce (MBACC), represented by its C.E.O. Brad Dean.

The original mission of the MBACC was to promote, support and represent the business community … especially in its dealings with local and state government.  In the case of Myrtle Beach, the Chamber became the voice of small business owners, retailers, restaurants, attractions and hotels. In most areas, it is the Hospitality Association that is responsible for direct advertising and marketing to prospective visitors.

Over the years, the Hospitality Association was absorbed into the Chamber, which has subsequently experienced what business analysts call “mission creep.” First it began to engage in more direct advertising and outreach tourism promotion and through its popular “Stay & Play Guide,” mailed to tens of thousands of people annually as a response to their inquiries about vacationing along the Grand Strand.  Today, MBACC promotes itself as serving in roles that were never intended in its original charter.

When local issues surface, area news media outlets are quick to get an “official” statement from Mr. Dean.  He has become the authoritative voice for all things Myrtle Beach.  However, residents are not able to vote for or against Mr. Dean.  Traditionally, the role of community spokesperson as it relates to issues that include crime, policing, redevelopment, or beach bacteria would be primarily filled by City spokesperson Mark Kruea, or the elected Mayor or City Councilmen.

Downtown merchants concede that the MBACC has too much say in local government, and most believe the Chamber does not support their businesses in conflicts that arise with City government.  Merchants maintain that by colluding with state representatives and business leaders, our local city government is now actively working to help pick winners and losers in our downtown city business community.  Examples that are repeatedly pointed out include the China affair (please Google it), downtown redevelopment, and the June 2017 Ocean Boulevard Barricades.  The MBACC is often silent on such issues, even though each clearly affects the day to day operations of small business owners.

The Myrtle Beach city budget has been entirely enmeshed with the MBACC since 2009 and the imposition of a controversial 1% retail sales tax.  Known as the Tourism Development Fee (TDF) but often referred to as “The Ad Tax,” it generates over $20 Million a year in revenue, almost all of which is funneled by the City into the coffers of the Chamber – a private enterprise. Although its primary function is to attract more tourists to the Myrtle Beach area, it is also used to give millions of dollars in property tax relief to less than 1 out of 5 of city residents as a real estate tax credit.

However,  the city’s budget is too dependent on the tax for its own operations.  When the “out of market” higher real estate taxes the city charges 20,000 oceanfront condo owners are added in, plus the required $250 business license the city charges each of these same oceanfront condo owners, it becomes clear that the city’s budget is heavily dependent on a group of non voting, over taxed “out of market” investors.

This tax gimmick puts a premium on (non-elected) city government bureaucrats as viewing the city more dependent on the system than local residents.

As a local, this may appear wonderful.  Should Myrtle Beach experience several back to back years of a substantial tourism decline, however, the entire system becomes at risk.  In that scenario, the city would not have the funds it needs to perform city services.  “Out of market” condo investors would work to rid themselves of their poorly performing rental properties,  oceanfront property values would then drop, taxes would be collected on lower oceanfront property values, and newer buyers would be less likely to build or purchase existing condos.

Is this scenario likely?  It is becoming more and more so as local leaders put the main emphasis on advertising and less emphasis on allocating taxes for directly improving the Myrtle Beach city brand.

The main issue with this system is that elected leaders believe it is their job to work for this system (not for us), even when the system operates in direct conflict with the best interests of local residents.

These same practices and belief systems extend out into and are held by Horry County government.

City, County, and State politicians depend on positive local news coverage, ongoing media spin, and Myrtle Beach Chamber related PAC monies to ensure re-election.  While the PACs are funded with non tax dollars,  the money is a cheap operating expense for Chamber supported large business families.  This system is well oiled and has not failed them to date.  With the approval of the SC General Assembly, millions of dollars in special taxes are collected by the City and County and end up in the coffers of the Myrtle Beach Area Chamber.  PAC monies and media coverage are reciprocated to the incumbents.

Local TV stations WPDE, WBTW, and WMBF are owned by giant, national conglomerates who receive millions annually from the TDF for tourism advertising in target markets.

Local stations insist those dollars do not affect the way they locally cover the MBACC and City government.   However, we have noted that often when MyrtleBeachSC.com writes an article exposing local city government or the MBACC, those same stations are quick to broadcast a rebuttal that supports the system.

These very same tourist industry PACs help reelect incumbent state senators and representatives in office – the very same state legislators who granted the City the power to increase sales taxes without a public referendum almost always required by law. When Governor Haley vetoed the TDF as regressive and insisted such taxes must be decided by City Voters, the House overrode her 80-16; the Senate by 40-5.

According to Mayor Rhodes, it is just too risky to put the tax measure before local residents.

As the law was written, again by the local legislative delegation of senators and representatives, it provides that no public audit of how the Myrtle Beach Area Chamber of Commerce spends the funds would ever be required.

Many local merchants and residents, however, tell MyrtleBeachSC.com that the TDF was an out of date concept at its passing in 2009.  America had already moved into the age of BRAND and brand engagement.  Had the City of Myrtle Beach instead invested the almost $200 million in TDF revenues in additional policing, downtown infrastructure and beach bacteria solutions instead of giving it to the Chamber with no meaningful oversight, Myrtle Beach would by now likely be considered among the best brands in the USA.

The SC Supreme Court is composed of a Chief Justice and four Associate Justices who are elected to ten year terms by the General Assembly. The terms of the justices are staggered and a justice may be reelected to any number of terms.  The SC General Assembly is made up of the elected incumbents that these MBACC related PACs and local media coverage/spin masters keep putting back in office.

Non-elected agencies and the personnel in charge of each, make the important decisions that most often affect the daily lives of local business owners and residents.  These agencies include the Downtown Redevelopment Corporation, The Community Appearance Board, the MBACC, and all City employees including City Manager John Pedersen.

Once on the boards of these commissions, high level, non-elected officials are rarely removed and seldom step down. Chuck Martino and David Sebok have been associated with the DRC since its inception in 1998.  Larry Bragg has headed the Community Appearance Board for more than two decades.

Despite City Council’s promise of an ‘unparalleled quality of life’ for community residents this week,  none of those currently elected are likely to fix this non accountable system.

As a local journalist, residents and merchants often ask me who they should vote for.

Voting out the above incumbents, who champion the current system, will certainly move the city forward.

However, it is imperative that voters choose wisely and vote for challengers who have the skill sets necessary to replace this carefully crafted broken system with one that is accountable to each of us.

Re-allocating millions from non-productive resources into brand improvements will require taking on the entire system. The system will fight to maintain the status quo that keeps it in power. Corporate media will likely not continue the glowing news coverage of local leaders once the funds have been appropriately re-allocated.

The skill sets needed to competently tear down this corrupt system and rebuild a more accountable system include:

AND WHAT DO WE RESIDENTS NEED TO FIX THIS:

The words to this song are written as follows. While the beach scenes in the video are beautiful,  it is the words that hold our attention.  These are the very words that can inspire and empower many of us older residents into a new hope and beginning.  As we become brave, this recent and unpleasant Myrtle Beach era will surely pass.