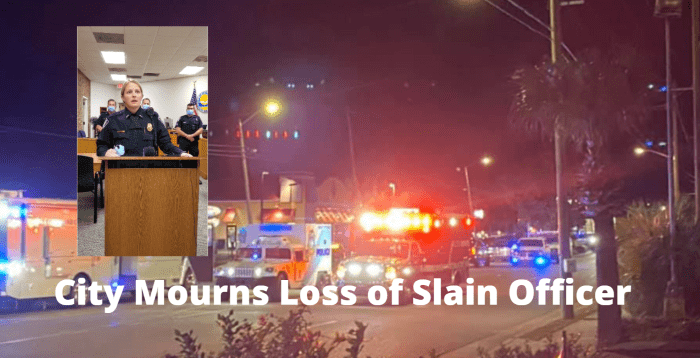 “Today we are mourning the loss of one of our officers,” Chief Amy Prock stated early Sunday morning. “PFC Jacob Hancher was killed in the line of duty while responding to a call for service.”

According to the MBPD, Hancher had four years as a community officer and just under one year as a police officer.

Myrtle Beach Mayor Brenda Bethune posted her condolence on Facebook early Sunday morning, asking the city to “join me in lifting up our MBPD family.”

“May God bless everyone affected by this senseless tragedy,” Bethune wrote.

Tourists captured the event on camera.

Those videos can be seen just below the statements of Myrtle Beach Police Chief Amy Prock.

UPDATE: MBPD are now stating a second officer was shot and taken to Grand Strand Hospital. He has been treated for his wounds. The shooter was killed by MBPD during the shootout.

All S.C. Restaurants Can Operate At Full House – Too Early? or Too Late?