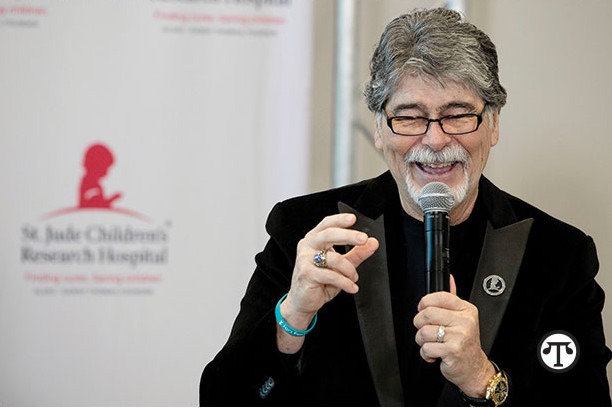 Show business great Danny Thomas became just about everything in entertainment—except maybe a country singer. But in his greatest role—founder of St. Jude Children’s Research Hospital—he understood the power of country music to help sick children. He also saw the close-knit bond between artists and radio, between radio and fans.

The result was “Country Cares for St. Jude Kids,” one of the most successful fundraising programs in radio history at $800 million. This year we’re celebrating the 30th anniversary of Country Cares, which began after Thomas approached Alabama lead singer Randy Owen and said, “I really need your people to get involved.”

He meant all the people of country music, who embraced the children of St. Jude as their own. There have been benefit concerts, campaigns for St. Jude such as “This Shirt Saves Lives,” and especially the annual St. Jude Radiothons at some 200 stations across the country. The result is nothing less than one of country music’s greatest hits ever.

Alabama has sold 75 million records, but Owen says, “Probably the most important thing I’ll ever do, except being a daddy and a husband, is St. Jude.”

Like Thomas, Owen didn’t just lend his famous name to a cause. He’s taken it to heart over decades of devotion. He’s visited with patients and families, he’s sung to them and for them. And, like Thomas, he has a gift for getting others to share his passion.

Up-and-coming country artists learn early on about St. Jude, from the groundbreaking research that’s freely shared around the world to the no-bill model that means patient families never receive a bill from St. Jude for treatment, travel, housing or food—because all a family should worry about is helping their child live.

Take Ashley McBryde. Long before she was a GRAMMY-nominated artist for her album “Girl Going Nowhere,” she was learning her craft in the clubs and bars of Memphis—and with a Wednesday-night volunteer gig at Target House, a housing facility for families at St. Jude.

Last year, she was back in Memphis for the Country Cares seminar, an annual gathering of artists and radio personnel. She toured the hospital for the first time, and later talked about why she supports St. Jude: “If you have a soapbox, and you don’t use it in a way that helps other people, then you don’t deserve a soapbox.”

Now, hundreds of radio stations, other country stars such as KaceyMusgraves, Kelsea Ballerini, the Brothers Osborne and Chris Stapleton, and millions of fans all rally around St. Jude, because despite great advances in treatment, children still die from cancer.

Four of five survive in the United States, which means we’ve come remarkably far but aren’t there yet. The situation is far worse in low- and middle-income countries around the world, where only one in five survives. That’s why St. Jude launched the St. Jude Global initiative and is collaborating with the World Health Organization, to reach more of the world’s sickest children.

• Mr. Shadyac is president and CEO of ALSAC, the fundraising and awareness organization for St. Jude Children’s Research Hospital.