What do Coastal Carolina Students think of Myrtle Beach? 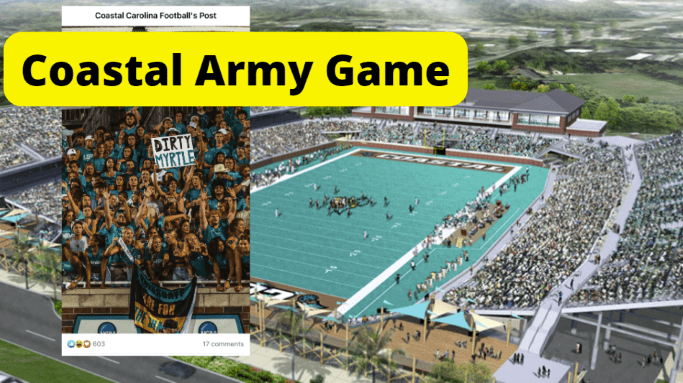 Coastal Carolina University beat Army 38 to 28 last Saturday night in what can only be described as a must watch event.

CCU stands apart in the Sun Belt Conference finishing in the top tier the past two years. Their games are regularly televised on ESPN+ with a strong, national audience appeal.

During those televised events, one section, or multiple sections of the fan base regularly hold up large signs that say Dirty Myrtle. As many as 2 million viewers watch these ESPN+ games weekly.

DIRTY MYRTLE – Is that a term of endearment or disdain?

It is said we can learn a lot about ourselves from those who know us best.

Karen Riordan, C.E.O. of the Myrtle Beach Area Chamber of Commerce let nationally syndicated papers know she was tired of hearing the term Dirty Myrtle. Both she and Myrtle Beach Mayor Brenda Bethune told the press they did not want the city branded as Dirty Myrtle any longer.

With a $51 million annual tax payer funded advertising war chest, Mrs. Riordan is willing to take on any who would promote the area as Dirty Myrtle.

CCU Football actually posted the Dirty Myrtle photo on its Facebook page. The post remained there, being shared over 600 times, until calls were made by city officials asking to have the picture taken down.

When students think of the town, they factor in the over 3,500 hundred homeless that roam city streets. Shootings occur almost every week.

Few Coastal Carolina Students are willing to visit the downtown (boardwalk) district. Yet the city continues to state that CCU will be moving some classes to that very area.

Talks have been bantered about for the past four years that Coastal Carolina University intends to purchase property in a run down area near the boardwalk.

“They’re not sure if it’s going to meet their needs or anything. So, what we did today was enter into a letter of intent with the property owners to secure the property and hold it for CCU,” said Downtown Director Chuck Martino in 2018.

“Then they [CCU] can determine whether or not they want to buy it, but in the time being, the DRC will be the placeholder to hold that property in the agreement of the property owners so they know that somebody is interested,” said Martino.

CCU sources tell MyrtleBeachSC news the purchase of the downtown theater has a possibility of about 30%.