When a “Free Beach Parking Law” isn’t really a law 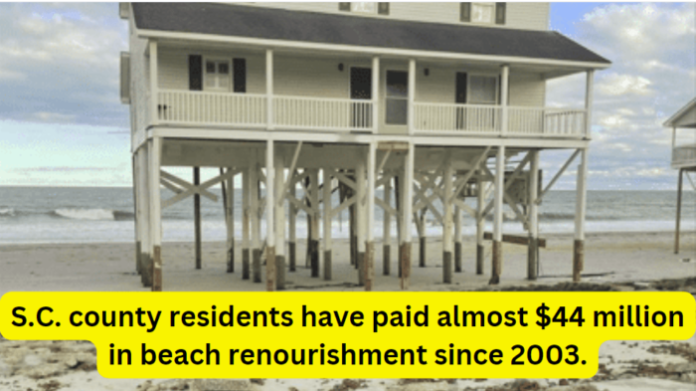 Hurricane Ian swept into the Grand Strand wiping out the dunes on her way northwest. The total damage assessment is still being tallied by the Army Corp or Engineers.

A Myrtle Beach spokesperson said the city would consider it a success if the work to replenish the beach is completed in the next two years.

Restoring South Carolina’s beaches has cost more than $250 million since 2003, according to a database kept by Western Carolina University.

County (state) residents are required to pay 17.5% of these tax dollars in matching funds. S.C. state/county residents have paid $43,750,000 prior to Ian. Ian has yet to be funded and certainly more hurricanes are on their way over the coming years.

While Horry County residents are required to contribute in matching dollars to re-nourish the beaches, oceanfront hotels, homeowners, and condo owners are not required to pay any more than their county or city share. A Garden City oceanfront beach homeowner (on Garden City Pointe) pays no more than a resident in Conway, S.C.

Despite these county resident handouts, however, the cities of Myrtle Beach, Surfside Beach, and North Myrtle Beach do not allow free beach parking during the peak seasons of the year.

2021 Law Written to address this inequity

AN ACT TO AMEND SECTION 57-5-840, CODE OF LAWS OF SOUTH CAROLINA, 1976, RELATING TO ALTERATIONS BY MUNICIPALITIES OF STATE HIGHWAY FACILITIES, SO AS TO PROVIDE USE OR RESTRICTIONS MADE BY MUNICIPALITIES ON STATE HIGHWAY FACILITIES OR RIGHTS OF WAY FOR MUNICIPAL UTILITIES, PARKING OR OTHER PURPOSES ARE SUBJECT TO PRIOR APPROVAL BY THE DEPARTMENT OF TRANSPORTATION BY ENCROACHMENT PERMIT; BY ADDING SECTION 57-5-845 SO AS TO PROVIDE FREE AND PAID PARKING RESTRICTIONS ON STATE HIGHWAY FACILITIES LOCATED IN BEACH COMMUNITIES ELIGIBLE FOR BEACH RENOURISHMENT FUNDS, AND TO PROVIDE FOR THE USE OF FUNDS GENERATED FROM MUNICIPAL PUBLIC BEACH PARKING CHARGES; AND TO AMEND SECTION 57-7-210, RELATING TO OBSTRUCTIONS IN HIGHWAYS, SO AS TO DEFINE THE TERM “HIGHWAY” AND REVISE THE PENALTY FOR VIOLATIONS OF THIS SECTION. – ratified title

McMaster later touted this major accomplishment to S.C. media. No one understood what the law meant, nor what it’s true intentions were at the time.

Getting A Straight Answer from the Bureaucrats

In June 2021, days after the law was signed, we reached out to Pete Poore of the South Carolina Department of Transportation asking him to explain the meaning of this new law.

The South Carolina Department of Transportation is the state agency given the mandate to enforce the law. The area of the law that drew our attention was: BY ADDING SECTION 57-5-845 SO AS TO PROVIDE FREE AND PAID PARKING RESTRICTIONS ON STATE HIGHWAY FACILITIES LOCATED IN BEACH COMMUNITIES ELIGIBLE FOR BEACH RENOURISHMENT FUNDS, AND TO PROVIDE FOR THE USE OF FUNDS GENERATED FROM MUNICIPAL PUBLIC BEACH PARKING CHARGES

We asked, does this section mean that a municipality must provide free parking to county residents in order to get beach re-nourishment funding?

Mr. Poore promised to respond promptly, but never chose to.

As MyrtleBeachSC News reported on October 3rd, prior to IAN, SCDOT Secretary of Transportation, Christy Hall began attempting to enforce the law in Charleston area beaches.

You can read about the push back from Charleston beach towns to these efforts at the link above.

We reached out to Mark Kruea, Public Information Officer, City of Myrtle Beach asking him if those funds existed in a special account accrued from the city’s parking meter collections. He said there was no such special account.

Said Kruea, “The city doesn’t have a “renourishment fund balance.”  We pay for beach renourishment costs over time using Accommodations Tax funds.  Renourishment is usually on a 10-year cycle, barring any emergency needs, so the amount is known and predictable well in advance, which makes bonding very easy.  The city’s share of the cost for one of the normal renourishments is 17.5 percent, with the state covering another 17.5 percent, and the federal government picking up remaining 65 percent.  We use tourism-related revenues to cover this expense for obvious reasons:  the beach is the prime reason we have visitors.  I would note that renourishment is not pre-determined; rather, it’s based on measured need, as determined by the U.S. Army Corps of Engineers (and available federal funding), although we seem to need sand about every 10 years, give or take.”

The 17.5% contribution paid by the state comes from state residents (County Residents). This equals $43.7 million paid by county residents prior to Ian since 2003.

HOW THE SYSTEM WORKS

These government bureaucracies are all connected to beach re-nourishment.

SCDOT – is the above law’s enforcer of this beach re-nourishment parking ammendment.

OCRM (Ocean & Coastal Resource Management)- a part of SCDHEC –  Their role is to provide guidance for eligibility and evaluate funding criteria for projects.

If you feel like you are swimming in circles trying to figure this one out, so did we in researching it. Exactly who is in charge?

We reached out to a legislative lawyer in Columbia to determine why the law was not being enforced.

He pointed us to the TAKINGS clause of the U.S. Constitution.

The takings clause reads: “Nor shall private property be taken for public use, without just compensation.”

Prior to the law being passed in 2021, Surfside Beach, North Myrtle Beach and Myrtle Beach each had a private-public partnership business call metered beach parking.

The takings clause mandates that state law can not put those semi-private businesses out of business without the state compensating the cities for that loss of business.

David – To be clear, my use of the term “grandfathered in”  is related to SCDOT approvals ONLY and is meant to convey that SCDOT is allowing previously SCDOT-approved parking plans to stand unless the local government proposes changes, expansions or other modifications to what was approved and in place prior to the effective date of the Act (May 24, 2021).    I am not aware of any proposals by the local governments in the Grand Strand area to modify the parking plans that have been previously approved by SCDOT.   Therefore, the new requirements to provide free parking would not be triggered.  Additionally, there is no requirement in 57-5-845 that requires free parking to be provided in order to be eligible for beach renourishment funding.

Hall’s final statement in red, left many questions concerning the legality of the law itself.

The Governor’s team then blocked our email account from sending the Governor future emails. We have emailed the governor at this account for over 3 years. We have never had our account blocked previously.

We have not heard back from Governor McMaster on this Free Parking Issue.