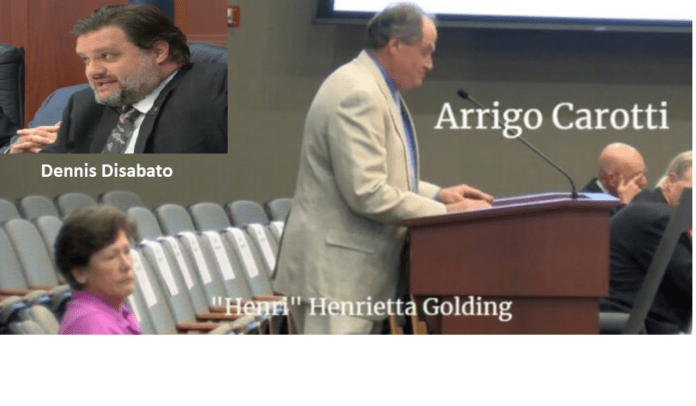 Horry County residents were stunned last night when Councilman Dennis DiSabato abruptly asked for an adjournment of council session before key items were to be discussed.

Local mainstream media questioned why he made a special order to end session. DiSabato refused to respond.

MyrtleBeachSC News learned today that DiSabato and Horry County Attorney Arrigo Carotti worked behind the scenes to ensure that no discussions would be held on the running county legal fees.

As the GrandStrandDaily published today: Horry County Council member Dennis DiSabato moved to adjourn council’s regular meeting last night before a discussion of county legal fees by council could take place. Council agenda listed the request for the discussion was initiated by council member Al Allen.
There is no question that a discussion of how much and to who the county pays fees for outside attorney assistance is public information. In a lawsuit two years ago, the county agreed that disclosure of legal fees ”is not legally privileged, is not exempt from disclosure under FOIA, and that it is important to the public interest that this information be available to the citizens and taxpayers of Horry County.”

Prematurely ending the meeting was the only parliamentary maneuver available to keep discussion of county legal fees from taking place in the meeting. Coming as it did immediately prior to the scheduled discussion makes it appear that DiSabato’s erratic behavior in bringing the motion was prompted by an ulterior motive for not wanting the discussion to take place publicly from the council dais.

Carotti hired controversial lawyer Henrietta Golding to represent Horry County in its lawsuit with the City of Myrtle Beach. We have covered Ms. Golding’s shady past dealings ongoing.

Hiring her was Carotti’s sole discretion. Previously Golding represented the City of Myrtle Beach. How this bureaucrat could not see a conflict here is unexplainable. The total Horry County spent on her legal fees has never been singled out.

THE CITY WON BIG IN THAT LAWSUIT

As we explained here:

Why did the other eight councilmen also not want the legal fees part of the public discussion?