Big Game This Weekend Is #15 CCU Vs App State 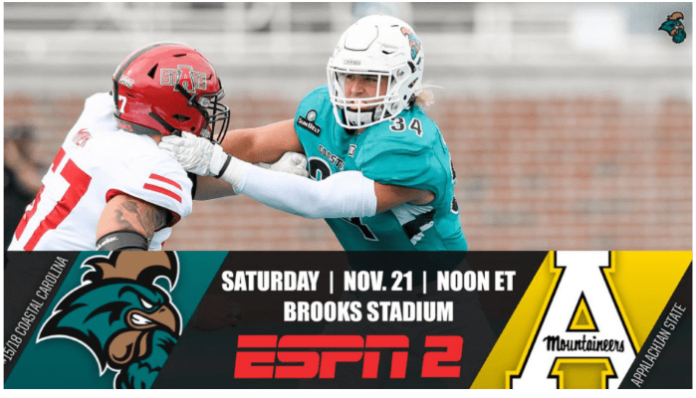 UPDATE: COASTAL CAROLINA WON THE GAME. THE TEAM IS A PERFECT 8 and 0.

While Clemson does play Florida State this weekend and the firing of South Carolina’s coach made national news, CCU undoubtedly plays the biggest state game tomorrow.

The game will be played at home in Conway, S.C. at Brooks Stadium. The game starts tomorrow at 12 noon and can be watched on ESPN2.

The Chanticleers are favored by five-points in the latest odds from William Hill Sportsbook.

• The Mountaineers rank second in the league in scoring defense, allowing just 16.9 points per game this year, and third in scoring offense with an average of 32.1 points per contest.

• The experienced offense has relied heavily on the run game this year, as the Mountaineers are second in the Sun Belt with an average of 261.4 rushing yards per game.

• App State has four players that have rushed for 275 yards or more this season led by running back Daetrich Harrington with a team-high 595 yards and seven touchdowns.

• Thomas’ favorite targets have been Malik Williams with 25 catches for 291 yards and two touchdowns and Thomas Hennigan with 22 receptions for 367 yards and a score.

• Defensively, the Mountaineers are allowing just 324.7 yards of offense to their opponents per game and have recorded 43 tackles-for-loss, 17 sacks, and 10 interceptions, all of which rank in the top five in the Sun Belt.

• Linebacker Trey Cobb leads the team with 54 total tackles, including 7.5 tackles-for-loss, while defensive back Ryan Huff and linebacker Brendan Harrington have a team-leading three interceptions each.

TO BE THE MAN, YOU GOT TO BEAT THE MAN• Coastal Carolina is 5-0 in the Sun Belt this season but will have to beat four-time defending Sun Belt Champions Appalachian State in order to help secure itself a spot in the 2020 Sun Belt Football Championship game on Dec. 19.

• The Mountaineers went 7-1 to repeat as co-Sun Belt Champions in both 2016 and 2017 before posting back-to-back 7-1 conference records and Sun Belt Football Championship game wins over Louisiana in 2018 and 2019.

• The contest will feature the top two scoring defenses in the Sun Belt in No. 1 Coastal Carolina at 16.3 points per game allowed and No. 2 App State at 16.9 points per contest surrendered.

• However, the East Division showdown also features two of the top three scoring offenses in the Sun Belt this season in No. 1 Coastal Carolina at 37.9 points per outing and No. 3 App State at 32.1 points per game.

PUNTERS MIGHT HAVE THE DAY OFF• The punters for both the Chanticleers and the Mountaineers might have the day off on Saturday, as the two teams are No. 1 and No. 3 in the Sun Belt in fourth-down conversion percentage this season.

• Coastal leads the Sun Belt and ranks 18th nationally with a fourth-down conversion percentage of 77.8 percent (7-of-9) on the season.

• Appalachian State is third in the Sun Belt in fourth-down conversion percentage at 60.0 percent (6-of-10) on the year.

CONTROLLING THE EAST• The Chanticleers sit atop of the Sun Belt East Division standings at 5-0 entering Saturday’s contest versus Appalachian State (Nov. 21) who is 4-0.

• Coastal is 2-0 over its East Division foes this season posting dominating wins over Georgia Southern (Oct. 24) and at Georgia State (Oct. 31).

TAMING THE WILD-WILD WEST• The Chanticleers are 3-0 this season versus the Sun Belt West Division with wins over Arkansas State (Oct. 3), at then-No. 21 Louisiana (Oct. 14), and versus South Alabama (Nov. 7).

• The 52-23 home win over the Arkansas State Red Wolves was the Chanticleers’ first in the all-time series.

• The 23-6 Homecoming victory over South Alabama was also the Chanticleers’ first-ever over the Jaguars.

SEASON OF FIRSTS• Coastal will be looking for the program’s first-ever win over Appalachian State (0-6) on Saturday afternoon.

• What bodes well for the Chants is that 2020 has been a season of firsts for the men in teal.