Grayson McCall out for remainder of the regular season 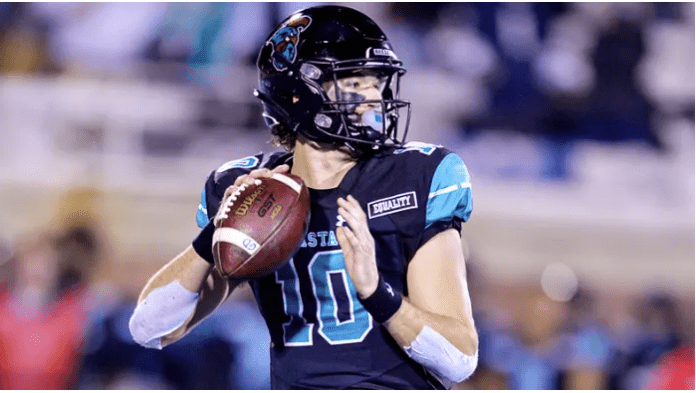 As Coastal Carolina University prepares to play the Southern Mississippi Golden Eagles tomorrow night at 7:30 p.m., they will do so without their star quarterback.

Grayson McCall will miss the remaining three games of the season. McCall is out for three to six weeks with a foot injury, the university announced Wednesday, putting even his postseason play in jeopardy. McCall sustained the injury during a 35-28 win over Appalachian State on Nov. 3rd. McCall threw for 253 yards and two touchdowns in that game.

Coastal Carolina stands in sole possession of first place in the Sun Belt East at 8 -1.

Left on the regular season roster are the Golden Eagles, the Virginia Cavaliers, and a finish at James Madison.

The Chanticleers are favored to make an appearance in the Sun Belt conference championship game. However, McCall is currently listed as the 5th best quarterback in the NCAA. Losing him is a huge set back for the team.

Losing McCall is also a major setback for the potential of team rankings, as well as, their New Year’s Six dreams down the stretch.

Winning out right against  Southern Miss, Virginia and James Madison would put the team on par with AAC contenders Tulane and UCF. McCall’s loss make this a much steeper hill to climb.

McCall averages 9.5 yards per pass attempt, and he has 21 touchdowns in 2022 with just one interception.

McCall is statistically the best quarterback to ever wear a teal jersey. His is considered a NFL quality quarterback, the best in S.C. in 2022, and is expected to be drafted.