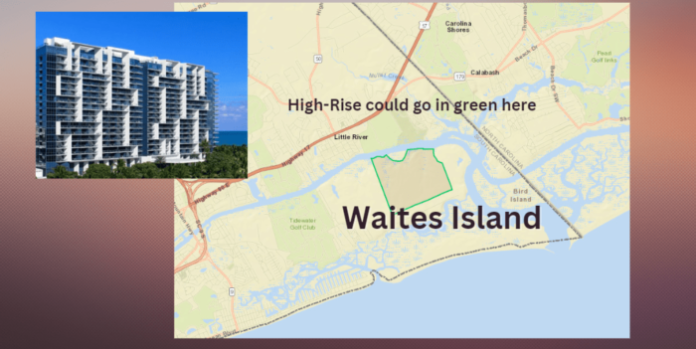 A Horry County Planning and Zoning meeting scheduled for this Thursday, January 5, 2023 at 5:30 p.m. may change that.

The meeting will be held at the Horry County Courthouse located at 1301 2nd Ave in Conway, S.C. The public is invited to attend.

A local development group is requesting rezoning approval of an area of Little River Neck Road adjacent to Waites Island. Future use for the land is currently Scenic & Conservation. The group wants the future use changed to Suburban.

This same effort was put forth in 2010 and failed. What’s different now? A newly elected official on Horry County Council has arrived.

While the request for the rezoning limits itself to 92 single family units, the long term implications are much wider.

The land use is currently Scenic and Conservation. Current zoning is commercial, forest and agriculture (CFA) which allows for home development.

CHANGING THE LAND USE OPENS A PANDORA’S BOX

What is the difference between land use and zoning? Land use reflects the desired future development pattern in a given area. Zoning designations more specifically define and regulate uses of specific parcels.

The northern third of Waites Island, was purchased by the Open Space Institute, which then deeded the property to the S.C. Department of Natural Resources. This was made possible by a $500,000 donation from Google. This preserves and protects the northern portion of the island from any development.

The lower third of the roughly 400-acre island, including the oceanfront, has already been preserved by Coastal Carolina University’s educational foundation. The university conducts it’s scientific research there. This protects the southern beachfront end of the island from development.

The entire middle of the island, along with the parcels on Little River Neck Road being discussed Thursday.

While his name will never be mentioned, the big winner in this future land use request is William Goodman Jr, the third richest man in Virginia. His company, Riverstone Properties, LLC, owns practically the entire center of the island.

As the other portions of Waites Island are now protected from development, Riverstone can leverage the Land Use change to demand their property also gain the same consideration.

Goodman will then have a private island for his desired high-rise development all to himself. The residents of Tidewater in North Myrtle Beach will then have an eternal view of that high-rise and the related traffic it brings.

For the record: William H. Goodwin Jr. owns Kiawah Island, (not a hotel on Kiawah Island), but rather the entire island. He would now (for all intents and purposes) own Waites Island as well.

As we wrote this past week, Little River Holdings business address is listed at a residential lake front lot near Greenville, S.C., in the name of Thomas R. Davis.

Kiawah Island is located in Beaufort, S.C. While most major state news stations reported on Senator Tom Davis (of Beaufort) being arrested on D.U.I. this past weekend, this arrest does not diminish his power in S.C. state government.

We showed the transfer of deeds records of Jenna Dukes’ Little River Neck scenic land purchase details in our recent article. They can be found here:

HOW INFLUENTIAL IS JENNA DUKES?

No one can now say Jenna Dukes is not influential in Horry County politics. None other than Brad Dean, the Head of Puerto Rico Travel and Tourism, and the longstanding former C.E.O. of the Myrtle Beach Area Chamber of Commerce showed up for her swearing in ceremony.

FIRST OUT OF THE GATE

This significant land use change is coming at Planning and Zoning cold and is scheduled to go before Horry County Council for a vote on Tuesday, January 10th.

Should Planning and Zoning approve this measure, big money will put pressure on Horry County Council members to approve it as well.