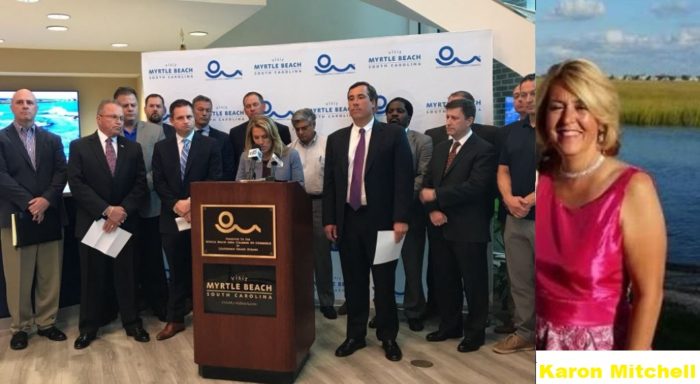 An overwhelming force, which included 15 of the most powerful people along the Grand Strand, did a “no holds barred” attack on life-long Myrtle Beach resident, Karon Mitchell.

Said Carla Schuessler, MBACC Board President, “The legal action filed by Karon Mitchell against the Myrtle Beach Area Chamber of Commerce is a baseless, vindictive attack on the Chamber’s staff, board of directors, marketing council, and several member businesses, filled with unsubstantiated allegations.”

Schuessler added, “Mrs. Mitchell is a disgruntled former member of the Chamber who refused to pay a late charge levied by the Chamber’s Board of Directors and her membership was dropped.  Subsequently, she failed in an attempt to create a competitor chamber of commerce. Make no mistake: the Chamber will vigorously defend itself against each false, incorrect and/or baseless allegation included in this action.”

Mrs. Mitchell quietly stood in the audience listening as this powerful group, one by one, approached the podium attacking her.

The Chamber made no attempts to explain why MBACC set up the four employee, “for profit”,  related corporations that the “not for profit” pours millions of tax payer dollars into annually.  These companies include:  Visibility & Conversions, LLC, Right Analytics, LLC, Com-Connect, LLC, and Battle Strategies, LLC.  All of these companies are paid TDF (tourist tax) dollars by MBACC.  Visibility and Conversions and Com-Connect received from almost $1 million to $60 million in tax monies per a complaint filed by Mitchell’s attorney. 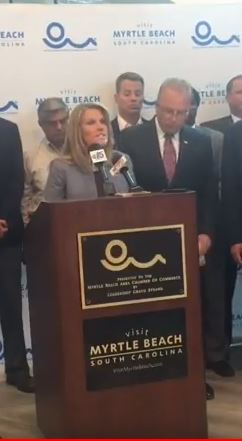 Few in the Myrtle Beach area have had the courage to take on this Chamber.  The group, which is funded with over $32 million annually in taxes, has substantial sway in Myrtle Beach city government, Horry County government, practically every legislator in the state, and the entire S.C. judicial system as those judges are picked by legislators.

Mrs. Mitchell is clearly in a David Vs Goliath situation.  MyrtleBeachSC.com’s owners have personally experienced how this group will drag out a court case for many years, running up substantial legal debt on a small business owner, keeping the case out of the courtroom, and forcing that company into failure.  This while also ensuring the business owner has limited to no opportunities for work in the local market.

At the end of the press release, Ms. Schuessler emphatically told the press, “No Questions!“, meaning no questions could be asked of those board members presenting.  Along with Ms. Schuessler, Matt Klugman, Marketing Director of VacationMyrtleBeach.com, made statements demeaning the complaint as well.  He also did not explain why the Chamber set up the four employee-related firms MBACC pays millions to annually. 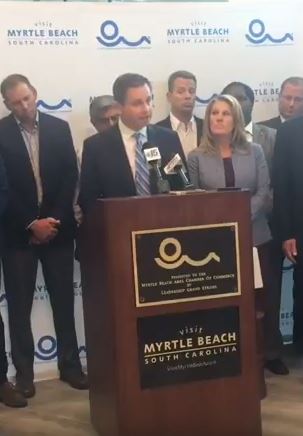 As a follow up after the press release we did ask Ms. Schuessler and Mr. Klugman the below:

Thanks to each of you for giving the community your time today to address the legal suit.
I was unaware that today’s airtime was a press release and not a press conference. I can understand why you would not want to take questions there.
A few questions we would like clarified for our a.m. April 11th article:
CARLA-
MATT: –  As you are the marketing director for VacationMyrtleBeach.com and are an expert in marketing
Once again,  great job today.  Your immediate response would be most appreciated.

Neither chose to respond to our questions.