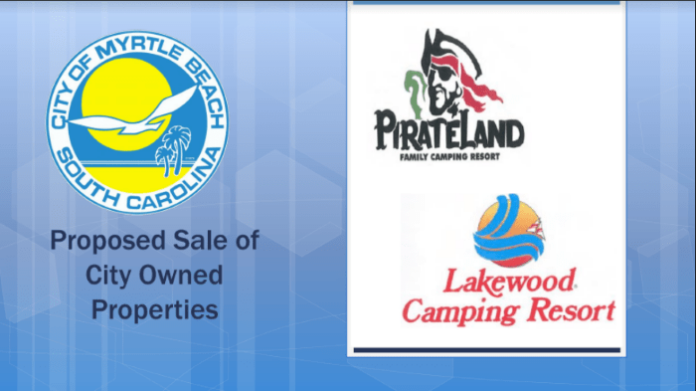 On Tuesday, Myrtle Beach City Council passed a first reading on the sale of campground land the federal government gifted to city taxpayers back in 1948.

NEVER PUT OUT FOR BIDS

The land is actually the property of Myrtle Beach city taxpayers.

It is odd, then, that the land was never put out for bids to interested buyers. The City of Myrtle Beach government chose only to negotiate with the current lease holders of the land.

The Ponderosa Group’s, John Springs, is an establishment insider. The Ponderosa Group currently leases Pirate Land Camping Resort. The group did have the right of first refusal on any offer, however, expectations were that other bidders would compete for the right to purchase the land.

APPRAISING YOUR OWN PROPERTY?

The City of Myrtle Beach government actually allowed the Ponderosa group to appraise the value of its own property.

A local private group wanting to bid for the property stated they felt the properties were worth $80 million. City of Myrtle Beach government negotiated a $60 million sale price.

WHO GETS PAID? LAWSUITS COMING

The sale will cost Myrtle Beach International Airport millions of dollars annually. Horry County Council is concerned about the impact of the city’s decision on the airport’s funding.

As per agreement 75% of the lease payments go towards funding Myrtle Beach International airport. 25% is paid to the City of Myrtle Beach. Pederson told MyHorryNews, “We believe the current split does not apply to proceeds of the sale.”

1953 Agreement: any revenue derived from “disposition’ of the properties to be used for the benefit of the airport.

On Nov. 6, Horry County Administrator Steve Gosnell sent a letter to Pedersen outlining the county’s concerns. In the letter, Gosnell wrote that the county’s attorneys have looked into the matter and found that both the 1948 deed to the property from the U.S. Government and the 1953 release from the federal government “are expressly premised on agreement that these properties are intended for the use and benefit of the airport.”

Gosnell noted that “this fundamental understanding” was the basis for the 2004 city-county agreement.

“These properties provide critical revenue for the operation of the Myrtle Beach International Airport,” Gosnell wrote.

In the letter, Gosnell gave the city 10 days to confirm that the city intends to comply with the 1953 release, “wherein the city obligated itself to ‘utilize any revenue derived from the use, lease, or disposition’ of the properties for the benefit of the airport.”

ANOTHER GROUP SUING THE CITY

Horry County Council is currently telegraphing their intentions to sue the city should a second city council reading pass.

The City of Myrtle Beach is among the most “highly profiled” sued city in the State of S.C.

With Horry County government alone, the City of Myrtle Beach is currently in lawsuits that include:

Another lawsuit for the City of Myrtle Beach looms just ahead.

Sale of Campground Properties by MyrtleBeachSC news on Scribd