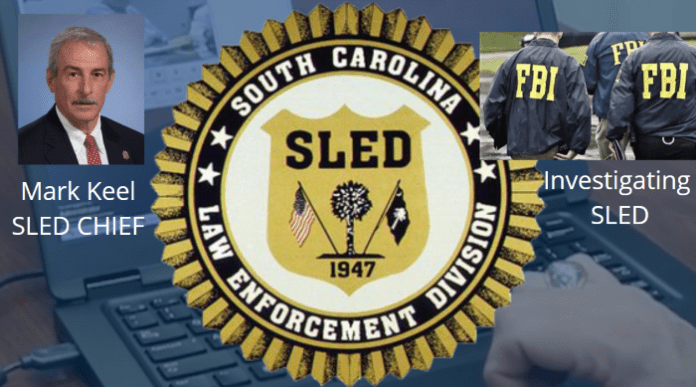 Sources inside the State House (in Columbia, S.C.) confirmed yesterday that the FBI has been called in to investigate SLED in regards to the Murdaugh saga making national headlines daily.

Those same Columbia elected sources state that SLED Chief Mark Keel will likely be asked to step down.

As WJCL reports: The FBI and United States Attorney’s Office for the District of South Carolina are now involved.

The South Carolina Law Enforcement Division announced Thursday that, as part of its ongoing investigation into the double homicide of Paul and Maggie Murdaugh, agents have “uncovered other potential crimes that warrant further investigation.”

And now the FBI and United States Attorney’s Office for the District of South Carolina are involved.

As we reported yesterday, The JMSC, The State Legislature, and the State Senate are at the true center of this matter.

Those systems are circular money makers and must be protected by a handful of powerful state leaders.

Governor Henry McMaster, himself, took over $31,500 in campaign contributions from the Murdaughs.

LINING UP THE FALL GUYS

At this very moment, influential state leaders are lining up a potential list of fall guys to make this story go away.

However, mistakes continue to be made. Example, Judge Clifton Newman was appointed to oversee all of the Murdaugh matters by Judge Donald Beatty. Clifton replaces Judge Carmen Mullen, who was compromised.

Newman is a former law partner of Ronnie Sabb who sits on the JMSC. Sabb is also on the judiciary committee in the S.C. Senate with Horry County Senator Luke Rankin. The law firm Newman and Sabb was created in 1994. Read more about Newman and his law firm here.

The lack of understanding about ethical implications here only causes the State of South Carolina even more problems moving forward.

In South Carolina, Reconstruction lasted from 1865 to 1877, with the break between Presidential and Congressional control occurring in 1867 when the freedmen were registered to vote for delegates to a constitutional convention. State institutions were overhauled and re-established by the Federal Government.

The state may be looking at the next round of reconstruction brought to them by the Federal Government unless a handful of S.C. insiders are able to shut this all down.