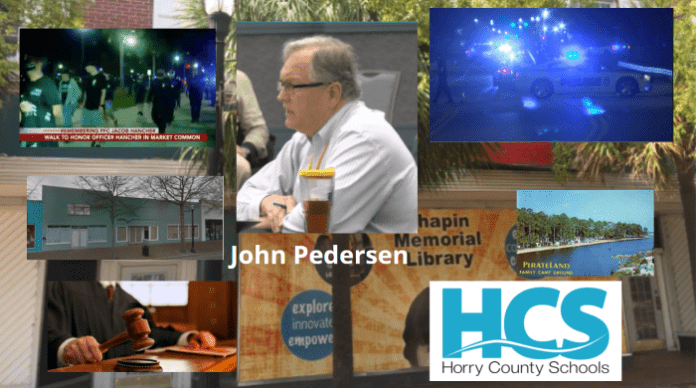 On New Years day residents make resolutions. The mantra is often “out with the old, in with the new.”

Today, former Myrtle Beach City Manager John Pedersen no longer wields the vast amount of power he lorded over the city for the past six years.

Much has been made by local media over Pedersen’s legacy this week. One local outlet even allowed the former city manager to grade his own past performance. He scored well in that self evaluation.

This past week, Mr. Pedersen has also taken to social media, email campaigns and late night texts to former business owners in an attempt at (what he calls) “setting the record straight.”

The Role of Local Government

It is not personal. This week, we counted well over 30 high profile leaders and county office holders who take issues with John Pedersen. The local lawsuits alone speak volumes.

As the 2020 elections proved, while conservatives focus on D.C., we are losing America at the local government level.

The recent presidential election was not lost in D.C.

Philadelphia, Detroit, Cobb County, Ga., Gwinnet County, Ga., and Taylor County, Ga., are the cities where the 2020 election was won or lost. Those areas in Georgia are located in the suburbs of the City of Atlanta.

GOVERNMENT MUST STEP IN

In all of the cities listed above, as well as the City of Myrtle Beach, a group of local bureaucrats (headed by a liberal City Manager) stepped in stating that government must do something. All of these Georgia cities existed in what was once known as a Red State.

Please note, there are few, if any, conservative bureaucrats in America.

Apathy, fear, and misfocused attention by city merchants and city residents fully account for how the City of Myrtle Beach became the brand it is today.

As WPDE News reported January 24, 2017: The City of Myrtle Beach has announced that it will build a new Chapin Memorial Library and Children’s Museum along Ninth Avenue North and Nance Plaza in downtown Myrtle Beach.

This hastily called press conference, with thrown together artist renderings, came about after MyrtleBeachSC News uncovered a private email between Myrtle Beach City Councilman Wayne Gray and his colleagues.

The smoking gun in the above email is Gray’s statement, “does it hurt legally and politically our move to acquire these properties.”

The Children’s Museum and Library were ruses from the start

Where do such ruses as these lead? The city ended up buying the 9th Avenue offices, many through straw buyers so as to conceal that the city was the true purchaser. No children’s museum nor any library will ever be located at that property.

Fast forward several years and the city is left with city owned properties that no one currently wants to buy and the city does want to sell. How does the city intend to sell and renovate these properties? The video below explains how Pedersen repurposed a shady LLC known as the DRC, the downtown redevelopment corporation, so as to get a Federal Tax Credit, the city was not otherwise entitled to.

In an email to a local resident Pedersen writes, “Fast forward to the summer of 2020 as the City began looking in earnest at a funding strategy for the renovation of the City owned buildings on 9thAvenue North. Given the age of these structures and the previous use, five of the six properties qualified for State abandoned building tax credits, and three qualified for both Federal and State historic tax credits. The application of these credits would have the effect of significantly reducing the amount of City support needed to finance this project. The problem, however, is that the City is not a private corporation, does not pay income taxes, and is therefore not normally in a position to take advantage of these credits. Pursuant to the recommendation of the City’s bond counsel, and a firm specializing in tax credits, a structure was developed that allows the City to take advantage of these credits. In order to make this work, it is necessary to add another not for profit organization into the mix. The DRC by-laws already authorize to the Corporation to play the required role. Rather than move forward with the final dissolution of the DRC, the Corporation has been repurposed to play this much more specific role. This saves both the expense and time associated with creating an entirely new organization from scratch. The DRC now serves only as a funding tool. The broader role that the DRC played before June 2019 is being written out of the revised by-laws.“

SAVING $5 MILLION ON PROPERTIES THE CITY PURCHASED THROUGH LIES?

Pedersen adds, “The bottom line, however, is that preserving the DRC is a necessary part of a strategy that off-set the City’s cost of renovating the buildings on 9th North. The total cost of that project is approximately $1.9 million, and the benefit derived from the tax credits off-sets $775,000 of those costs. I anticipate that the same structure will be used with respect to the theater project on Main Street, which should off-set about 50% of the estimated $9 million construction costs. It is a complicated structure, but I think most people would agree that it is worth the complications to save more than $5 million dollars for the taxpayers of this City.“

Who shot officer Hancher? Myrtle Beach Police Officer Jacob Hancher was shot on Yaupon Street in October. It is now January 1, 2021, yet the city still refuses to produce the ballistics report that would clearly tell us what bullet killed the officer. Government accountability seemed to be beneath this city manager.

One of the city’s top priorities was to ensure that barricades were placed on Ocean Boulevard during peak tourism weeks. Arriving on vacation to find barricades is much like visiting a city block where all the store windows have bars on them. Who wants to shop there?

Mr. Pedersen also enlisted Police Chief Amy Prock to ensure that all city merchants on the boulevard wore identification badges. If they refused, Pedersen threatened to put the barricades back out. We covered that story here in April 2018. Could you imagine the City of North Myrtle Beach, Conway, or Surfside Beach doing the same to their downtown merchants? Residents of those towns would not put up with such.

While Pedersen speaks of saving city taxpayers $5 million above, he refused to put the sale of 145 acres of Oceanfront property out for bids. He knows fully well that the current leaseholders of those campgrounds have the right of first refusal on any offer made.

In short, that means, should the properties receive an offer of $100 million, the lease holders have a guaranteed right to match that offer and the sale is theirs. We covered that article in depth here.

THE HOSPITALITY WARS AND LAWSUIT WITH HORRY COUNTY

We literally could write a novel in this area of city management.

Former City Manager John Pedersen is a spinmeister. As of today, he is also a man without a country.

Unless he suddenly re-appears in the middle of things, there is no purpose for speaking about him moving forward.

It really is up to the residents to reign in the unbridled power grab of the local city government.

Myrtle Beach clearly moved from a red city to a blue city under Pedersen’s watch.