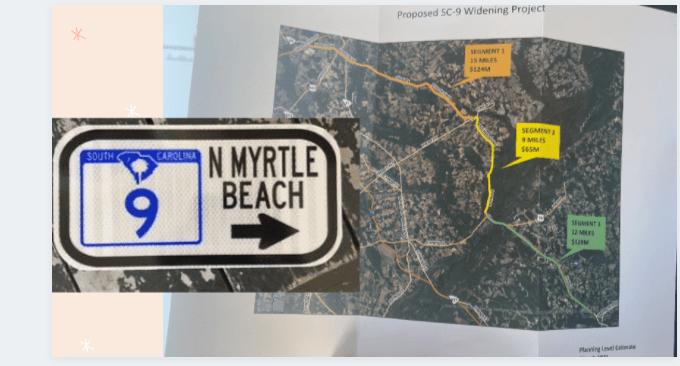 The South Carolina Department of Transportation has published its estimate on the cost of completing a four lane highway from I-77 in Rock Hill to the North Myrtle Beach coast.

SCDOT broke the costs down into three different segments. Projected estimates put the entire cost for the project at $317 million.

The four lane road will run South from I-77 to I-95 at Dillion then on to the coast in North Myrtle Beach.

This will be the Grand Strand’s first highway crossing these two critical interstates and feeding into the coast.

Why are I-77 and I-95 so important? I-77 is a major interstate that will now connect Charlotte to North Myrtle Beach with easy access. The North Myrtle Beach exit at I-95 will be first exit for tourists traveling from Northeastern America.

THE PEE DEE AND UPSTATE ARE MAKING COMMITMENTS

As upstate news reporter Robert Monnie writes: Widen Highway 9 to four lanes?… that was the recommendation of a group of concerned stakeholders during a February 22 meeting. The upgrade would affect S.C. 9 from the inter-section of S.C. 9 and S.C. 265 just west of Chesterfield and S.C. 151 in Pageland, S.C.

The entire group of stakeholders involved in the project include: SCDOT personnel, Pee Dee Council of Governments Personnel, state legislators, and the private sector.

A two laned highway 9 already exists from Interstate 77 to Interstate 95 to the coast. The road is four laned in several areas, including from North Myrtle Beach west to just before Nichols, S.C.